June 19, 2013 at the St. Petersburg International Economic Forum (SPIEF) was held the signing of a Memorandum between the Government of the Kaluga region, OAO "Russian Agricultural Bank" and AO “Kaluga Region Development Corporation”. This Memorandum consolidated the parties' intentions to form the largest agro-industrial cluster on the border of New Moscow and embrace the linchpins of agricultural production.

The government and Corporation intend to provide potential investors for comfortable conditions to realize on the territory of the Borovskiy district Kaluga region investment projects. Within the bounds of these projects will be established enterprises providing the deepest processing of agricultural production in a closed-loop production cycle, as well as companies that meet the requirement in transportation, storage and delivery of the final product to the consumer.

Prerequisite for the establishment

Kaluga region is dynamic and investment-attractive region that has a positive experience in the development of industrial parks
The Kaluga region is the intersection of flows of food and agricultural production from the South of Russia, Asia and Europe
The largest production-logistic cluster is created in the north of the region
Kaluga region immediately adjacents to New Moscow
The growth in consumption in Moscow agglomeration

Attributing the status of industrial park

By the order of the Ministry of economic development of the Kaluga region from 6/10/2014 No. 851- p land plots owned by LLC Agro-industrial Park “K-Agro” were given the status of the industrial park.

The K-agro project provides with complex development of the territory including an industrial cluster, territory for warehouses placement, complexes for long-term storage, produce processing and dealer preparation of agricultural products, in addition administrative-business area and dwellings zone. All parts of the project, allow for the fact of operating largest multimodal terminal and logistic center presence within the boundaries of industrial park, are mutually complementary and intensify their synergetic effect. Since 2017 the Industrial park K-ARGO is part of "Association of industrial parks of Russia". 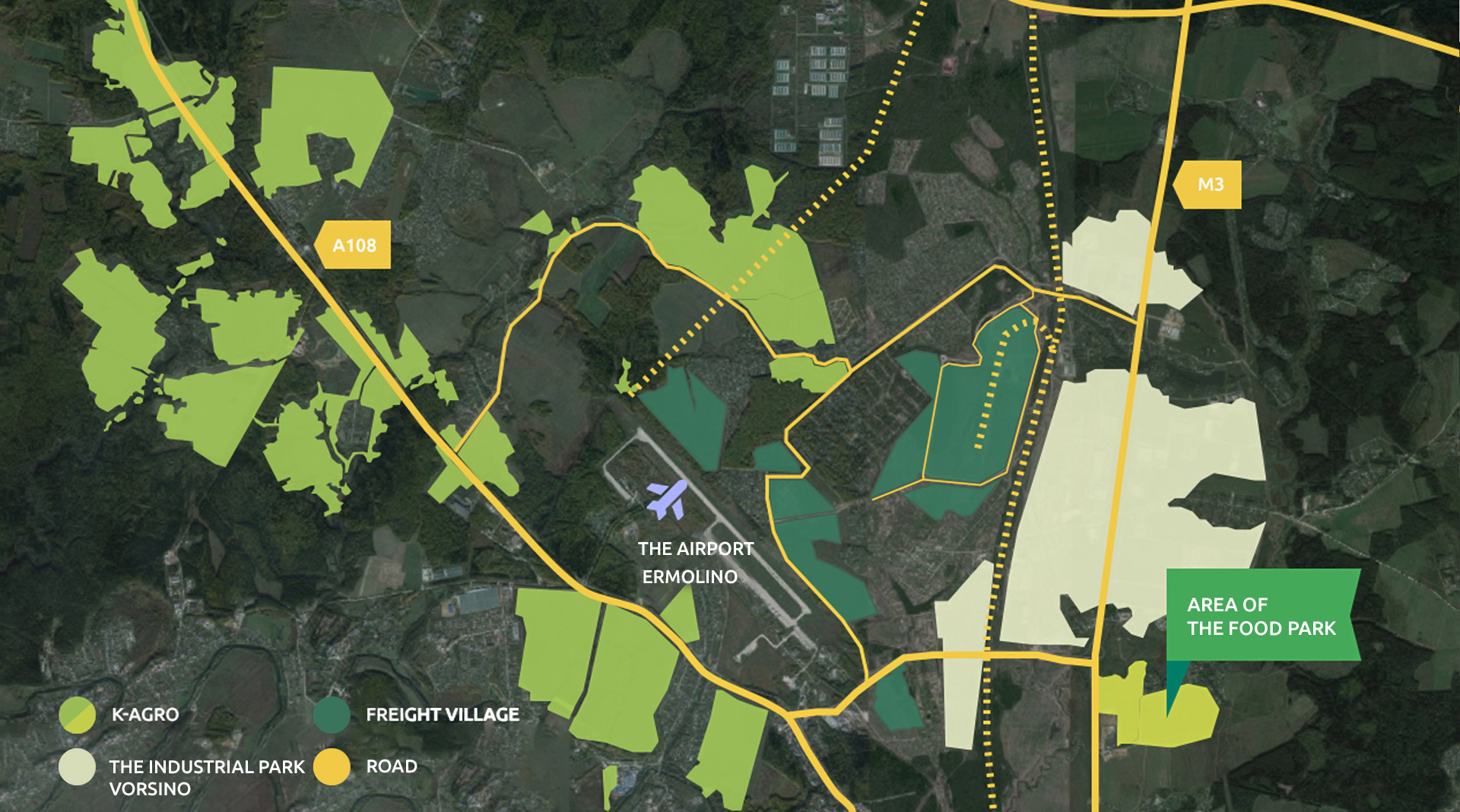 FOOD park – the first stage of the project

Territory of 80 ha has directly M3 "Ukraine" junction and is well provided for all needed utilities (gas, electricity, water supply and sewerage). Since 2016 in "Food Park" has started placement of investment projects.

Partners of the project:

Government of the Kaluga region

Support for the project:

Do you have a question?

Send us an e-mail to get a prompt response.

residents of the Park

Agroimpeks-trade LLC is an international company that has been selling green coffee, cocoa beans and cocoa products for 25 years. The company's new project is a factory for the production of bean-to-bar chocolate, chocolate mass and coffee roasting.

Tekleor LLC is an innovative company whose investment project - the center of development and adoption of processing technologies by the accelerated electrons for foodstuffs. In a stage of start the largest retailers, wholesale distribution centers, large-scale mechanized catering establishments, the Ministry of Defence, Rosrezerv have taken an interest in this project.

Mikaello LLC - Confectionery factory Mikaello has been successfully operating on the sweets market since 2001. This company is modern, dynamic, developing and one of the leaders in segment of manufacturing of chocolate glazed fruit and nut candy.